Twenty-five years after the original Type RA rolled off the production lines in Japan the US market is finally getting it's own. Apart from the monster 6-piston monobloc brakes and carbon fiber roof, the USDM Type RA comes with "upgraded pistons" and "more aggressive" ECU mapping.

According to Mike McGinnis of Innovative Tuning the ECU mapping on the Type RA is much more aggressive:

As compared to the standard 18 STI, peak power is increased through more aggressive ignition timing and a touch more boost at high RPM. To realize this increase, high quality 93 octane fuel seems to be required based on dyno testing multiple vehicles. On 91 octane fuel, the Type RA exhibited knock significant enough to pull several degrees of timing, sometimes reducing DAM to the point of reducing boost.

This lead to many Subaru enthusiasts speculating on just how upgraded the pistons really are. So Jeff Sponaugle took it upon himself to order a fresh, new Type RA shortblock from Subaru to find out. This is what he found. 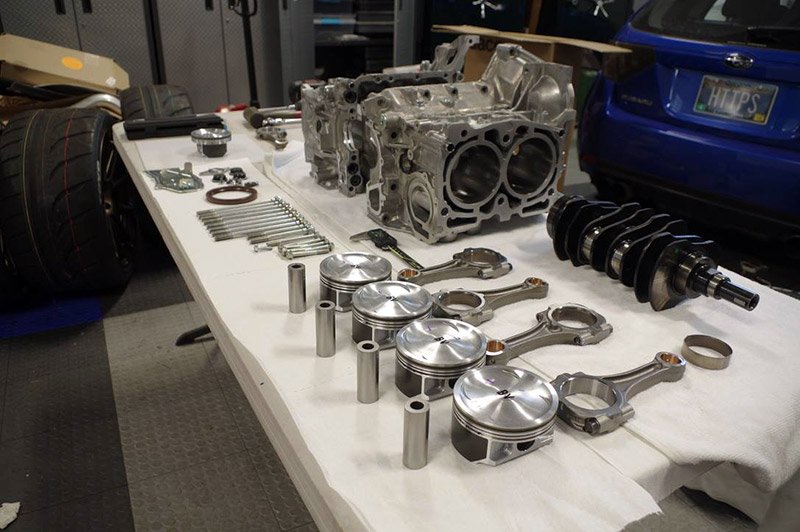 The block is the same casting as the latest engines, numbered "705." The crankshaft is the same nitrided, full-counterweight design found in previous EJ25s. Unfortunately, the crankshaft doesn't have the additional oiling ports found in other special edition EJs. The bearings and clearances thus far have been within typical late-model EJ257 specs as well. 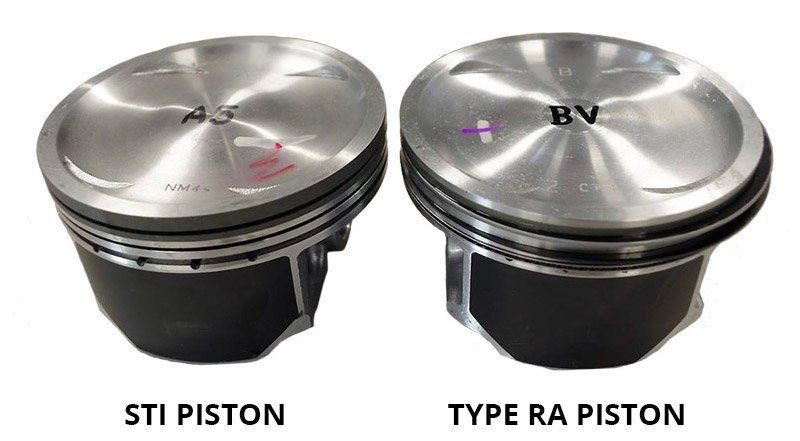 Upon initial impression, the Type RA and STI piston are both machined cast pistons. The dish volume measured out very close to each other and the valve reliefs are the same depth. Unfortunately the Type RA does not have forged pistons as some had hoped for, although we haven't ruled out the possibility that the Type RA pistons are made from a different alloy that is less susceptible to fracturing (more ductile), as they are supplied by Hitachi rather than Aisin. The crown on the Type RA pistons appears to be 1 - 2mm thicker than the STI piston as well, which is hard to discern from the picture.

From the side profile you can see a few differences. First, the coating at the top ringland is extended to the crown on the earlier STI pistons. This is likely due to manufacturing differences (less tooling / different tooling) rather than any specific performance difference. Second, there is considerably more material supporting the wrist pin on the Type RA piston.

Earlier STI pistons weigh in at 414 grams while the Type RA pistons weigh 424 grams. The extra 10 grams of weight is not a big deal when you consider the improvements made to the piston design. For comparison, forged pistons for the EJ257 typically weigh in the 370 - 400 gram range depending on bore size and design. The wrist pins weighed the same for both motors. 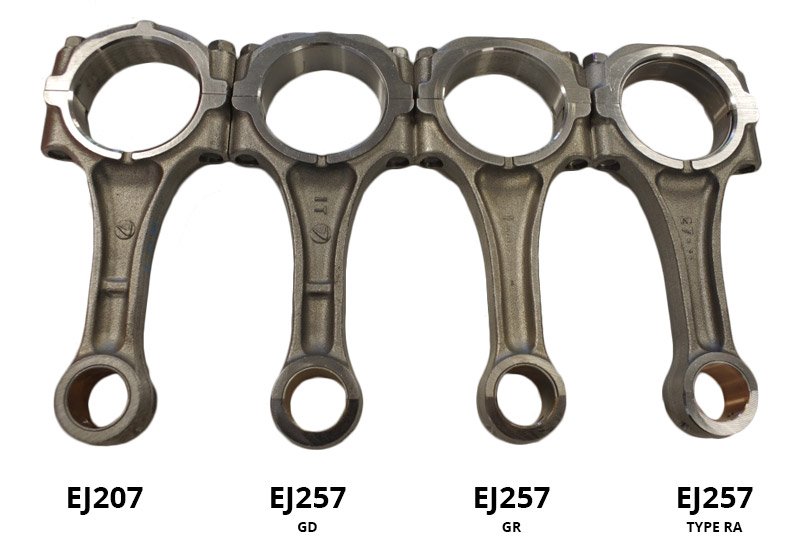 The Type RA rods are identical to the GR STI's rods as far as my eyes tell me. Not a big surprise considering the rods are definitely not the weak link in the motor. There are some differences in the late model rods compared to the earlier EJ257 rods and the EJ207 rods, notably the closed channel on the big end's internal bore and the lack of a perpendicular reinforcement rib . 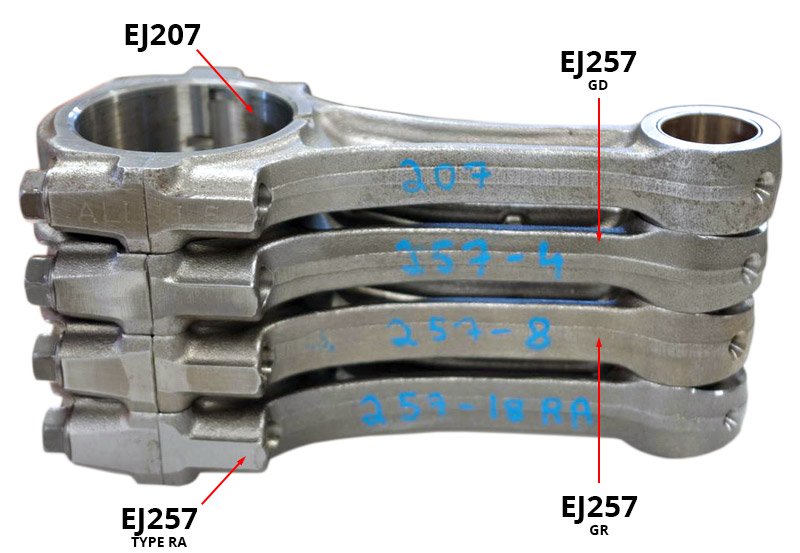 No visual differences between the GR STI rod, and in fact, the 2018 STI and Type RA rods share the same part number. 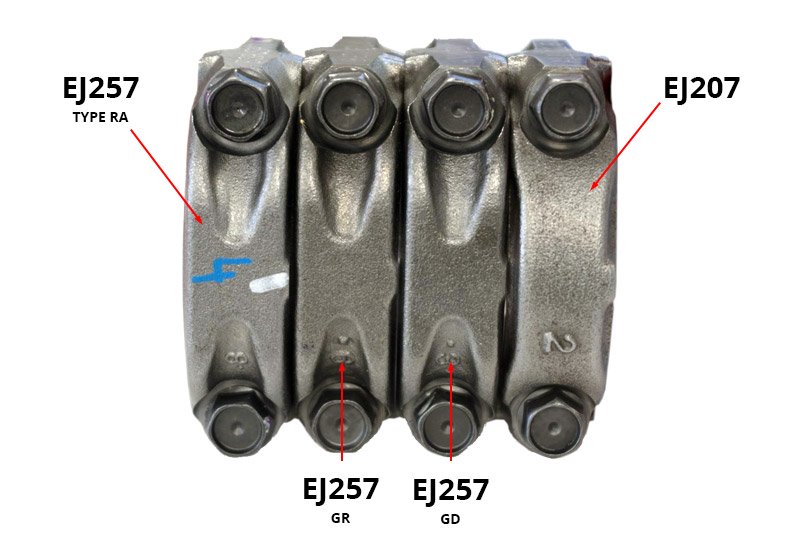 
Part numbers will vary for different variations such as piston diameter (Grade A vs. B)

Thank you for the contributions you both made to this article!


Have an Idea or Question?

We are constantly looking for new content ideas and feedback from the community. Head over to our contact page and send us an email with your ideas, comments, or questions. 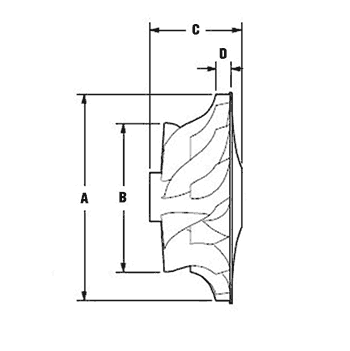 We respect your inbox and send only 1 - 4 emails per month.

We will never spam, sell, or do annoying things with it ... ever.

Let us know you liked the article by sharing it with others.

Submit a Review of this Article